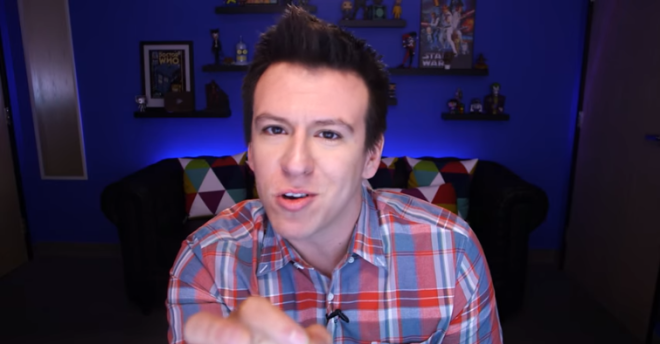 The Internet’s been on one heck of a roller coaster this week: YouTuber Philip DeFranco uploaded a video saying that YouTube pulled advertisements from a few of his videos for “graphic content or excessive strong language”. Which is interesting, since DeFranco, creator of SourceFed News, talks about, well, news. News can have graphic content. And while, yes DeFranco does curse in his videos, it’s nowhere near the excessive level. The man gets passionate about certain topics, and curse words come out to display his frustration or disbelief. It happens. It’s the Internet. DeFranco runs a professional YouTube channel; his videos certainly fall within the “advertiser-friendly” category. If you want to see excessive strong language, go watch some Angry Video Game Nerd. I’m definitely not singing that intro song in public.

The thing that concerns me, though, is YouTube’s reasoning: if a YouTuber’s video has graphic content or strong language, then advertisers won’t want to have their brand associated with that content creator. Sure, I get it. Companies like Gerber wouldn’t want to run ads in front of violent images or cursing.

But it’s concerning that YouTube has outright banned the option for ads- they’ve essentially created a standard of censorship. But it’s not quite clear what that standard is. DeFrano even mentioned that he’s been doing this ‘YouTube’ thing for ten years now, and he hasn’t seen this much backlash on his videos until recently. Although he’s evolved, the show has stayed pretty true to its roots- talk about important news, with a little bit of pop culture thrown in.

This fall marks the fourth year I’ve worked at my college’s news station, so I know the dangers of censorship. It ruins the integrity of journalism, and destroys democracy. How can the people make an informed decision when the information is tainted?

I’m also concerned about consistency of the ‘graphic content’ tag. DeFranco mentions that, while some of his videos have been flagged, others with similar content have not. And even videos that have no graphic content at all have seemingly been flagged as such. What happens in Google gets caught up in some sort of scandal, like human rights? Will YouTube then flag videos talking about their wrongdoings as ‘graphic content’, discouraging people from talking about it? With YouTube’s notoriously known horrible  appeals process, they could effectively wipe out videos on any topic of their choosing, just by stopping the cash flow. Even, apparently, acne remedy videos.

And while I can imagine that this is good for certain brands, I think YouTube is making a big mistake when it comes to advertising to its biggest audience: young Internet natives. Take gaming videos, for example. Predominately watched by a male Millennial-and-younger audience, those videos reach an extremely hard to talk to group. There’s countless brands that would love to get that audience. But gaming videos can also be violent- look at Counter Strike or Call of Duty. And, shocker, people curse in them. YouTube’s most subscribed and highest paid talent, Pewdiepie, plays violent games and curses often. And sure, maybe Gerber’s not clamoring to pre-roll on his channel, but you better bet many other companies are.

I’m not really sure why this is even a problem: it’s the Internet. First of all: you can find graphic content and excessive language everywhere. Second: if this is such a problem, can’t we just filter these videos out? Isn’t there just a ‘No Cursing Teenage White Boys’ box Gerber can just hit, and everything’s fine? And third: how stupid do advertisers think we are? When I see a McDonald’s commercial before this guy, I don’t automatically associate the two together. I know the ad is an ad, and Tyler Oakley is Tyler Oakley. They’re separate things. The people you’re trying to reach on YouTube are digital natives- we know what pre-rolls are.

Unlike what Google has gotten away with in the past, the changes that happen to YouTube now will always be met with more flames and pitchforks. Gone are the days where you just post funny family videos, YouTube has become a livelihood for many people. It’s become some people’s jobs, and not just the face on screen. For every Philip DeFranco, there’s a small staff of editors, creators, and managers behind them. So when YouTube starts playing with their money, of course there will be hundreds of videos about it.