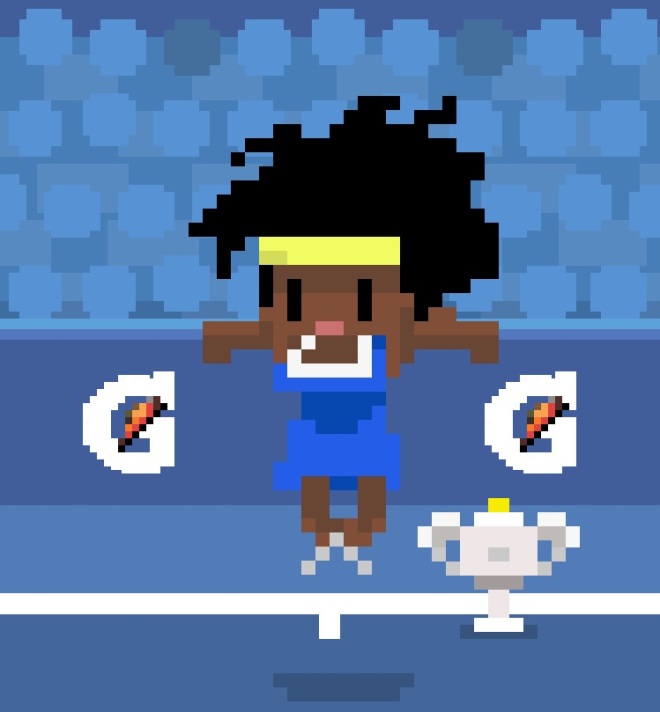 As much as last week’s game, The Crystal Pepsi Trail, is near and dear to my heart, I’ve found another great addicted game this week. I usually don’t stop on ads when flipping through my daily Snapchat stories, but this Gatorade ad made me stop. Just look guys:

LOOK HOW CUTE SHE IS. At first, I thought this was just an adorable 8-bit version of Serena Williams, aka the best tennis player ever. Not only is she decorated in Olympic gold, and is a powerful role model for black girls everywhere, she’s going for her 23rd major title. 23rd! If she wins at the U.S. Open this year, she will have won the most singles grand slams of any tennis player. Ever. Serena beat the boys long ago when she hit win #18, putting her ahead of beloved tennis star Roger Federer, and she’s currently tied with Steffi Graf at 22. And seeing as she’s the favorite to win this year… (Yeah, shocker.)

But this isn’t just an adorable 8-bit Serena. This is an adorable 8-bit Serena game. Gatorade has created a game to commemorate Serena’s past wins as a sponsored ad on various Snapchat Stories. The premise and controls are simple: re-live Serena’s rise to the top by playing through all 22 final matches, tapping the left side of the screen to hit the tennis ball left, and vice versa for the right. Since 22 grand slams is a lot, Gatorade has graciously provided checkpoints along the way, so if you do lose, you only go back a few rounds instead all the way to USA 1999. Sounds easy enough, right? Initially, yes. I breezed through the first few rounds, from USA 1999 to the present. Then, England 2009 happened.

Oh, Wimbleton, with your white outfits and grass court. Why do you hate me? For each round, you get three chances to win, or scoring the final point in the final round for each tournament. So when I lost all three times, poor Serena had to go backwards. Again. And again. I felt like I was letting Little Serena down with my poor tennis skills.

I eventually figured out the strategy: keep your opponent on one side by hitting a few balls on one side, then snap a return to the other side. Hopefully they’ll be caught up on the one side, and won’t make it to the other side in time- instant victory. But this strategy doesn’t work as well as you progress. The opponents get smarter. They start to always go back to the middle of the court after hitting a ball, requiring you to hit the tennis balls back perfectly for an added speed boost. And if you don’t outsmart them fast enough, the ball continuously gets faster and faster, until your reaction time isn’t fast enough to return it.

It’s the details that really sell this mini game. These types of games don’t usually see this level of care- typically there’s some sort of gimmick that becomes overused and exploited. It’s easy to tell they’re created, and expected to be used for, an engagement for a second, and thrown in the trash the next. And although the simple controls are gimmicky and get old fast (22 rounds, after all), the small details keep the game refreshing enough to finish.

The speed boost function is one of those details. If you hit the tennis ball at just the right time, not only do you get a ‘Perfect’ speed boost, but you get Serena’s grunt as an added sound effect! The screen also slightly shakes in time with your hits, making it really feel like you’re swinging a racket around.

One of the other details I really loved was the character design. As I progressed through the game, Serena’s sprite, her opponent’s sprite, and the court’s graphics changed to reflect whatever major I was at.

Even Serena’s racket color would change with the matches. It was great to see how much care went into this. Gatorade could have easily cheaped out on this and just kept the same Serena sprite throughout. But seeing as Serena’s potentially the highest paid female athlete of 2016, Gatorade knew they had to bring the heat, even if it was for a Snapchat game.

If you want to play the game without tapping through countless Snapchat Stories, there’s also a website link to it here. Note: although it will run on desktop, the game is designed as a mobile one, and will behave much better on such.

4 thoughts on “Baa, I’m a GOAT Thanks to Serena”