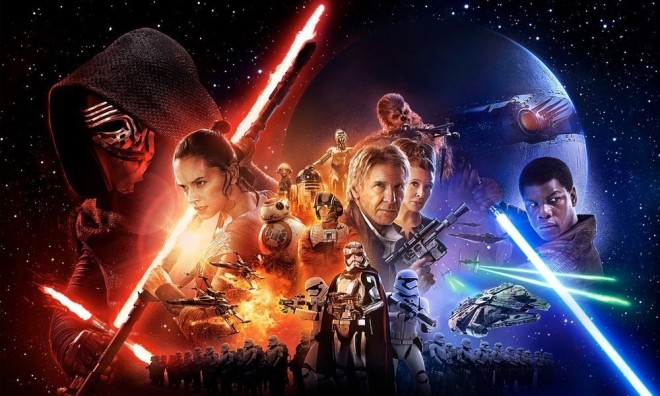 I’ll be honest- I’ve never seen a Star Wars film in my life. But I can follow along thanks to all the references I’ve been exposed to over the years. Everyone hates Jarjar (Jar-jar? JarJar?), the solo guy always shoots first, Darth Vader is Luke’s father, princess honeybuns and Luke are related, and a thing called “The Force”. That’s all I really need to know, right?

And as being in the elusive ‘Millennial’ category, I’ve been getting blasted with advertisements for the new movie that releases this month. It’s obvious of Disney’s possession of Star Wars with all of the partnerships with other companies using characters in their ads. Campbell’s, Kraft Mac n’ Cheese, Subway, Duracell, Covergirl, Verizon, HP… But what got me interested in this soon-to-be-released flick was an article I read off Mashable.

Apparently, some people are confused on why Target is currently carrying a special edition pack of six figures from The Force Awakens. No problem with that. I’m all for collectible figures. But it’s the figures they decided to include is what’s interesting.

People have noticed that one of the main characters, Rey, has been left out of the package. It’s a bit odd that they did, seeing as she seems to take the center focus of the movie poster.

The article does clarify that Target offers a Rey figure as an individual pack. And, odds are, Target didn’t choose which characters would be included, but they did choose to purchase it from whoever did. But this isn’t the first time a female has been left out of a Target toy collection for a movie franchise that’s thought to have a traditionally male audience.

Including females and generally anyone who doesn’t fit in the generic white male stereotype has always been a struggle in traditional nerd culture, to the point where I’m not surprised that this is still a thing. They’re hardly included in the actual product itself, much less it’s promotion. But a few days after reading this article, I stumbled across this Kohl’s ad:

What I like most about this ad is that there’s no overproduction about the girl being a fan, no “OHMYGERD A GIRL” moment. Just a regular girl who happens to like Star Wars. A pretty normal thing that’s treated as being pretty normal. Which it is. The tag line, ‘A Force For Family’ is also a solid move. Star Wars has become a multi-generational fandom. It’s clear that Kohl’s is trying hard to show that everyone, no matter their age, race, or gender, can be a fan. While I was loving this ad, I noticed that Kohl’s released another with the same type of message:

What a great message of self confidence and promoting the idea that you can like whatever you want to like. Kohl’s has clearly done it’s homework when coming up with this campaign. Without pushing a ‘We’re-Such-A-Great-Company-For-Including-Everyone’ gimmick, they’ve promoted the love people have for this franchise in a classy way. Bonus points for Kohl’s for including different body types as well. And for the win, just look at what kind of toy pack Kohl’s offers:

I’ll leave you with one more:

Maybe that’ll be me if I ever get around to watching one of these things.

3 thoughts on “The Force for Everyone”